Nothing is known of the motivation which led Alessandro Scarlatti to throw himself suddenly into the exploration of instrumental music, following 36 years of noble endeavors and reforms which evolved from a privileged rapport with vocal music for the theater.
For in 1715, he composed the Variazioni su “La Folia”, and in 1716 the Dieci partite, Toccata per studio di cembalo, and Tre toccate, ognuna seguita da fuga e minuetto.
Perhaps these works resulted from a commission, or were part of a publishing scheme, considering the sudden commercial success in the previous year of the posthumous edition of Arcangelo Corelli’s Concerti grossi, op. VI.
But as you listen to the pure and diaphanous polyphony of these pieces, try and imagine this 55-year-old man as he creates his imaginary stage, far from fertile terrain of words and music, which the unpredictability of the human psyche brings to the orchestra. 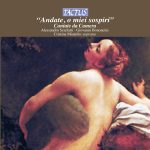