Born in Fiesole in 1325, a fine organist — as well as organ builder — Francesco Landini spent most of his life in Florence, serving as chaplain and organist at the church of San Lorenzo. Upon his death in 1397, his funeral was celebrated with honour in this same church, and his tomb may be found there. “Francesco degli Organi”, as Landini was also called, was a poet, astrologer, literary figure, philosopher and musician. He was thus a man of culture “tout-court”. As such, he was often present in the cultural life of Florence, and many literary and poetic sources contain references and praises to him. The enormous renown and dissemination of his works also witness Francesco’s fame and notoriety. One of his ballatas, “Questa fanciull’amor”, is found in its original form in three manuscripts, and its melody reappears in six different musical versions, ranging from intabulation to the German tradition of sacred and liturgical contrafacta. The works of Francesco Landini are almost entirely secular, and consist to a large extent of ballatas: he wrote a total of 91 for two voices and 47 for three. Originally tied to the dance and to musical performances, which alternated soloist and chorus, this poetic form was set to music, with a monodic structure, beginning in the thirteenth century. Yet written documentation concerning this genre is scant when compared to its widespread popularity, due in part to the development of the poetic school known as “Dolce stil novo” 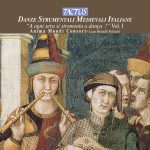