Biagio Marini (Brescia, 1594 – Venice, 1663) now is remembered not only as one of the most famous violin virtuosos of his time and an innovator of instrumental music, but also as a masterly composer of vocal pieces, both sacred and profane.
The Concertos op. 7 reveal the composer’s mastery. Adopting some traditional forms of the profane music of the Renaissance, such as the canto a ballo and the romanesca, and using ritornellos and refrains interspersed with different formal systematisations (nos. 1 and 5), Marini created complex, dynamic pieces, achieving a splendid synthesis of all the composition elements.
These stylistic features that were typical of Marini’s work arose and developed on the basis of his everyday musical life, in which he was active not only as a composer, but also as an instrumentalist and singer.
The Costanzo Porta ensemble from Cremona, directed by Antonio Greco supported by the instrumental ensemble Cremona Antiqua, performs here for the first time this previously unknown collection of madrigals including texts, by famous poets of the time, inspired by themes and subjects from the pastoral poetry from the early seventeenth century. These are superbly put on music using “madrigalisms” that, a part for the voices, are extended to the accompanying instruments. 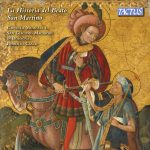 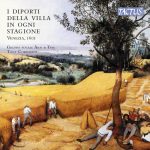 The Pastimes of theVilla in Each Season, Venice 1601Humanism and Renaissance