The collection of 44 motets for solo voice and basso continuo that was published in Venice in 1625 by Leonardo Simonetti appeared on the scene of early-16th-century Italian music as one of the most important works in the field of sacred solo-voice motets.
The editor, a chorister in the Cappella Marciana, which was then conducted by the great Claudio Monteverdi, collected these pieces choosing them among the most important ones produced by composers chiefly from the area of Venice and Veneto.
This anthology of motets, all of them magnificent, includes, besides Claudio Monteverdi, other composers who were active in Venice during the 16th century as choirmasters and organists in the churches of Frari, San Salvador and San Marco, and in the Venetian Hospitals: among them, there are Giovanni Rovetta, Alessandro Grandi, Giovanni Caprioli, Giacomo Finetti, Dario Castello, Francesco Usper, Carlo Milanuzzi and Bartolomeo Barbarino. 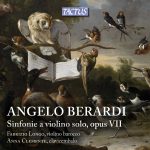 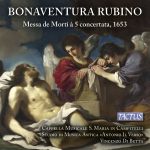