A music lover might wander in vain from one musical dictionary to another, searching for even the slightest reference to Giovanni Meneghetti.
He was born here in 1730 or thereabouts (there is no record of his birth), the son of Gaetano, an orchestral conductor, organist and fine violinist, and Giovanni was universally remembered—like his father—as a fine violinist, organist and orchestral conductor.
In discussing his works, biographers unanimously cite his cantata for the Accademia Armonica of Vicenza entitled Gli elogi della musica (1757), based on a text by the Vicentine nobleman Giulio Tortosa, as well as his requiem Mass—performed at the composer’s own funeral—in addition to his other sacred music: Masses, oratorios and motets.
The Archicembalo Ensemble would like to offer a portrait of Meneghetti’s instrumental writing.
This recording presents five of his six concertos for violin and strings (the sixth is lacking the viola and bass parts and would need to be reconstructed), preserved in the Fondo Malaspina of the Archivio di Stato in Verona; the sonatas for harpsichord in Bb Major and G Minor (belonging to the Library of the Fondazione Ugo e Olga Levi in Venice and the Biblioteca Civica Angelo Mai in Bergamo, respectively) and, the sonata in A for violin and basso continuo (also in the Bergamo library).
The concertos adhere to the traditional form of three movements—allegro-adagio-allegro—inherited from Vivaldi and kept alive in the following century, albeit with a myriad of variations and exceptions. 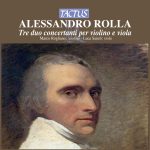 Duets for Violin and ViolaClassicism 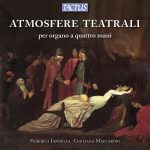