A lot has been written but little has been told about the Neapolitan Ferdinando Carulli, considered the founder of nineteenth-century technique and didactical teaching of the guitar; his figure as composer (he left us an endless number of compositions), represents an essential reference for the study of the guitar. This CD, performed by Sandro Volta and Mauro Bonelli, is focused on one of the least considered aspects, yet very important for the formation of a musician: the music for two guitars in its fundamental meaning: on one hand exquisitely concertistic pieces, on the other hand dedicated to pure didactics – real “Lessons” – for which the compositions for two performers are particularly important. The interpretation of these works by Ferdinando Carulli was developed on the basis of the use of two period guitars with catgut strings from the collection of Lorenzo Frignani, in Modena, and on a “historically informed” performance practice. The result is aesthetically quite different from that obtained with modern instruments: its distinctive qualities are a more audible “noise” when the fingers pluck the strings or run over them, a more marked difference in the timbres of the various ranges, and also a particular lightness of sound. 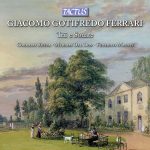 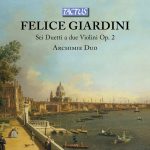