Adriano Procolo Verati was born in Bologna in 1849 and died there in 1911.
He was one of the last Bolognese organ makers: his father Alessio (b.
Casadio di Bologna, 1798 – d.
Bologna, 1873), founded the family workshop in 1820, and handed down his art to Adriano and his brother Ludovico (b.
Bologna, ? – died there post 1864).
He built small and medium sized organs in typical eighteenth century style, partly integrating the characteristics of the Cecilian reform, and even experimenting with pneumatic action.
There are still twenty of his organs in the dioceses of Bologna and Imola, and there are others built by him in Emilia Romagna, Liguria, Tuscany and the Marches.
He also made changes and restored existing organs.
The organ used for this recording was built by Adriano Verati according to the canons of the reformist movement, for the Esposizione Internazionale di Musica held in Bologna in 1888, where it was awarded the Silver medal, and was bought by the church in Argelato the following year.
Even though he did not solve all the problems he encountered when constructing such an innovative instrument (the first Bolognese organ to have two keyboards), the timbre Verati gave the organ was true to the great Italian tradition: this organ represented a distant outpost in the classical organ building art, after which nothing inspired by it was built in the regional capital, until the Tamburini in S.
Maria dei Servi (1967).
As far as music contemporary to the instrument’s construction is concerned, the “moltissimi pregiudizi troppo radicati in Bologna” (the many prejudices so deep-rooted in Bologna) regarding organ building, pointed out by the Gazzetta Musicale di Milano [year XIII, N.
16, 21st April 1889], meant that not many works were handed down to us, and those that were are mainly inspired by liturgical and operatic models, which have little to do with the musical and musicological happenings in Bologna in the 19th century.
This recording traces the passage from the picturesque stylistic characteristics of the late 19th century to the complex compositional structures of the first half of the 20th century, through the controversial (and mostly unexplored) Cecilian reform period, during which the Argelato organ was constructed. 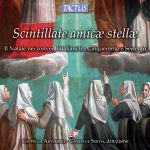 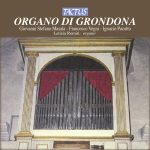 The Organ of GrondonaVarious Ages