The first modern performance with the addition of ripieno trumpets, oboes and flutes.The research of Hans Joachim Marx and, later, of Franco Piperno concerning the documents relating to the performances which took place in Rome under the patronage of the Ottoboni (but also of the Accademia del Disegno di S.Luca and the Ruspoli family), testify to the existence of a practice which has been hitherto ignored: that of doubling the instrumental music composed and conducted by Corelli with all sorts of wind instruments.
This practice, amply documented by the many payrolls of the musicians hired by Corelli, forces us to re-examine his music from a totally different point of view from that which has prevailed up until now, one which has been entirely dedicated to the faithful reproduction of the compositions printed by Roger in 1714.
This is thus the first complete performance of the twelve Concerti Grossi by Corelli which attempts to reconstruct accurately the historical-musical context in which these works were created and glorified.
A context which is rich, sumptuous and paradigmatic, and which has constituted for decades the European model to which musicians and patrons alike looked with admiration.
Today this musical practice has been restored and re-proposed for the first time to the modern listener.
Anyone interested in learning more about the historical justification for this reconstruction is encouraged to read the studies of Marx and Piperno.
Here, instead, we will attempt to shed light on the strictly musicological aspects which have guided our work.

Concerto I in Re maggiore 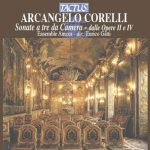