The catalogue of instrumental music written by Antonio Salieri (Legnago, near Verona 1750- Vienna 1825) is not particularly extensive, for this Italian composer, who in Vienna was considered (as his pupil Beethoven jokingly put it) the pope of music, dedicated himself more actively and more creatively to the world of opera.
Among his instrumental works which are already known from available recordings are not only some of the finest sinfonie avanti l’opera, but also the two symphonies in D (the Venetian and the Onomastic), together with the monumental series of 24 variations for violin, harp and orchestra on the theme of the Follia di Spagna; the double concerto for flute, oboe and orchestra; the triple concerto for violin, oboe, cello and orchestra; the two piano concertos (in C and Bb); the serenatas for winds; music for the ballet; and the mysterious and fascinating octet for winds, Armonia per un Tempio della Notte, of Masonic inspiration.
All told, this is quite a respectable packet of scores which are now accessible to contemporary listeners, although, with the exception of the ballet music, these pieces still need largely to be rediscovered and re-evaluated.
There is, finally, a small body of chamber works, including a piano sonata recently edited by Jörg Demus, another sonata printed in Vienna, six short pieces for guitar, Picciola serenata d’Ant. Salieri for string quintet (Milan, 1778), and a wind quintet written in Rome for the senator and prince Don Abondio Rezzonico. 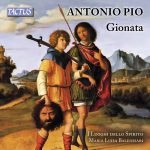 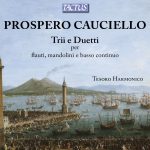 Trios and Duets for Flutes, Mandolines and ContinuoClassicism