“Journey” is the word that best evokes the figure of the eighteenth-century artist, who carried around with him all his store of poverty and hope, success and oblivion. This was the fate of many unknown men and women who left their country in quest of new horizons, this is how things went in the many-sided world of art, music and theatre: throngs of comedians, itinerant actors and virtuoso musicians, with their travels, overcame the felicitous confusion of languages that to this day makes Europe an inexhaustibly rich source of transversal, universal culture. Prospero Cauciello, First Flute to the King of Poland, Virtuoso of the Royal Choir of Naples, violinist in the orchestra of the Teatro San Carlo, published his music in Lyons and Paris, and his Opus IV in London between 1766 and 1780. Practically unknown to posterity, he is a perfect embodiment of the personality of the virtuoso, the versatile instrumentalist, the Neapolitan musician, who, like many fellow countrymen of his, crossed the frontiers of his country in the second half of the eighteenth century, and, though he did not go down in history as one of the great musicians of his age, managed to carve out for himself a considerable niche within the area of instrumental music and of the Italian violin school of that period. 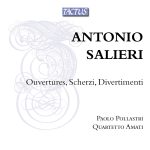 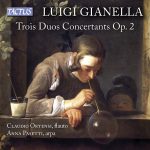