Roland de Lassus (Orlando di Lasso), musician and composer of the 16th century, is one of the masters of 16th century polyphony, considered by many to be the most versatile. He began as a young chorister at the church of Saint Nicholas at Mons and in 1544 was engaged at the court of Ferrante I Gonzaga, viceroy of Charles V in Sicily, with whom he travelled to France and Italy. From 1549 to 1552 he was in Naples, then from 1553 to 1554 in Rome as choirmaster in San Giovanni in Laterano, where he met the famous Giovanni Pierluigi da Palestrina. From 1560 to 1594 he remained at the court of Duke Albert V of Bavaria, becoming choirmaster at court. In this capacity he made several journeys to the Netherlands, to Germany, Bohemia and especially to Italy. The collection consists of 24 bicinia, or compositions for two unaccompanied voices or instruments, a genre which came into being in the first half of the XVI century, clearly aiming to teach polyphonic composition. The collection includes 12 on a sacred Latin text while the rest has no text. This music was composed in the mature years of Lassus, during the time when he was employed by Duke Albert V of Bavaria, where he was an esteemed choir master and when he undertook regular journeys to Italy. 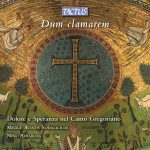 Dum Clamarem – Sorrow and Hope in Gregorian ChantHumanism and Renaissance 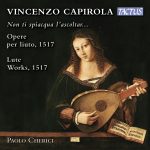