The figure and work of Bernardo Storace are particularly fascinating because of the aura of mystery which surrounding both.
The only information we have on this remarkable composer for keyboard instruments is printed on the frontispiece of his one known work, the “Selva di varie compositioni d”intavolatura per cimbalo ed organo by Bernardo Storace vice Chapel Master of the Illustrious Senate of the Noble and Exemplary City of Messina”.
The continuous earthquakes that afflicted Messina right up to the beginning of the twentieth century destroyed any existing evidence of Storace and his works.
The one example of the Selva, which has fortunately survived, was printed in 1664 in Venice, then a very important printing centre, but is without the editor”s name or a dedication.
This vast florilegium is made up of a wide range of variations based on nearly all the popular themes of that time, as well as two courantes, two toccatas and canzonas, two ricercari and a pastorale.
Storace had a prodigious imagination and a natural talent for variations. 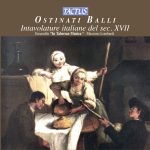