Felice Giardini was born in Turin in April of 1716. He studied violin with Giovan Battista Somis, former pupil of Arcangelo Corelli and founder of the Turin violin school, and at 20 he joined the Orchestra of the Teatro Regio in Turin; then he undertook a series of trips that took him to Germany, France and finally to London, where he lived for 35 years.
There, in a very short time he became famous as skillful and stylish violinist and began attending the cultural and noble atmosphere of the city, obtaining the license by King George II for the release of nine collections of works.
As witnessed by Charles Burney in his pioneering music history, Giardini fame spread to Italy and Germany, and its activities as violinist, composer, impresario and choirmaster, flourished until 1790, when he began his downward spiral, which led him, almost eighty years old, in 1792, to undertake one last trip to Russia, where four years later he died, forgotten and in poverty.
Within this album the Mirus Quartet accompanied by fine soloists are rediscovering his quartets, perfect examples of Giardini great music that led him to win the English aristocracy of his days. 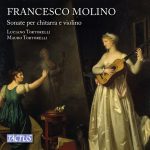 Sonatas for Guitar and Violin Op. 2 and Op. 7Classicism 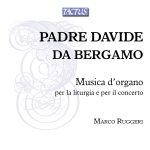