The harp and the Kingdom of Naples: an ancient bond that can be traced back to a period much before the introduction of the pedal harp in Italy. A history that was always poised between “popular” and “cultivated” tradition, between the streets and the theatres, between the churches and the drawing-rooms, and was characterised by a great mutual permeability of two musical worlds that, all too often, are regarded as separate and distinct.
Giovanni Caramiello, who was a concert performer, teacher and composer, embodied a synthesis between the two musical worlds that imbued the Neapolitan musical circles.
Among his compositions there were didactic transcriptions of harpsichord pieces, works inspired by the melodies of Gluck, Beethoven and Pergolesi, and fantasias for one or two harps, or for harp and piano, based on themes drawn from Rossini’s Barbiere di Siviglia, Donizetti’s Poliuto, Bellini’s
Norma and Sonnambula di Bellini, and Verdi’s Don Carlos, Traviata, La forza del destino, Un ballo in maschera, Aida and Ernani.
He also composed several pieces inspired by popular songs, such as his Rimembranza di Napoli, which contains the themes of Fenesta ca lucive and Santa Lucia, while the collection titled Le serenate del Vesuvio is formed of “6 Popular Melodies transcribed and varied for the Harp in the form of Studies”: Chelle che tu me dice, by Guglielmo Cottrau, Le Stelle della Sera, by Rossi, Fiore de Primavera, by Teodoro Cottrau, Giulia gentil, by Martelli, Bella Cate and Canzone della Pulce, by Ruta. 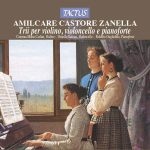 Trios for Violin, Cello and PianoRomanticism 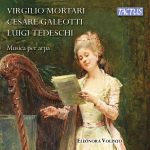