The Concerto per pianoforte e orchestra in sol minore op. 15 (whose opus number was given by the publisher: Sgambati had called this piece op. 10) was composed between 1878 and 1880, and is the first work of this kind in Italy in the second half of the nineteenth century.
In the monumental structure of this concerto, which is divided as usual into three movements, the piano writing, which attains the utmost degree of masterly inventiveness, is placed at the service of a fully symphonic form.
So in this work, Sgambati showed that his vocation was that of symphonist (this vocation, which he had already revealed in advance with two overtures, Cola di Rienzo, 1866, and Ouverture festosa, 1878, would later be confirmed by him with three subsequent symphonies): the prolonged orchestra sections of the first movement, and the perfect integration between the piano and the orchestra in the final movement, demonstrate it.
The overture for Pietro Cossa’s Cola di Rienzo is one of Sgambati’s first symphonic works (together with the Sinfonia Festosa and some short pieces such as Scherzo-Valzer and Marcia-Inno: the composer’s transcriptions for piano for four hands of Sinfonia festosa and Marcia-Inno are included respectively in the seventh and second volume of his Complete Piano Works).
The CD ends with a transcription: Jules Massenet’s small-orchestra instrumentation of Berceuse-Rêverie, second piece of Trois Morceaux op. 42, the last collection of piano pieces composed by Sgambati and published in 1909 (included in the second volume of his Complete Piano Works).
The exquisite texture of this piano piece, which evokes an imaginary, longed-for past, like certain Pre-Raphaelite paintings, is expressed in subtle, hazy colours by a delicate orchestration that highlights its European taste. 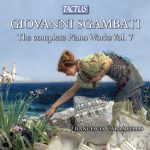 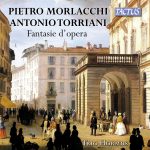