Leone Sinigaglia is a musician who deserves to be rediscovered. He was a Jewish composer who was born in Turin on 14 August 1868 and died there on 16 May 1944, of a syncope, in front of the military force that had come to arrest him in the Ospedale Mauriziano, where he had sought shelter from the Nazi-Fascist persecution. During the period of his education in his native town, Sinigaglia often stayed in Milan, where he struck up important friendships with Antonio Bazzini (a violinist and composer who was professor of composition from 1873 and became director of the Conservatory of Milan from 1881 onwards), and with his pupils Alfredo Catalani and Giacomo Puccini. Bazzini urges him to travel to Europe for completing his training with the great names of the era, first of all Brahms, who, however, not accepting pupils but recognizing their value, will divert him to Eusebius Mandyczewski, teacher of great fame and professor of composition at the Vienna Conservatory. From these years in Vienna comes the great masterpiece by Sinigaglia: the concert for violin and orchestra included in this prestigious live performance by the young world star Laura Marzadori, first violin of La Scala in Milan. The CD includes two pieces for cello and orchestra performed by the refined soloist Fernando Caida Greco, and the delicate orchestral piece “Regenlied”. Marco Zuccarini leads with great confidence the Città di Ferrara Orchestra in this live concert organized by the “Comitato dei grandi Maestri”. 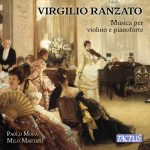 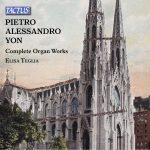