A repertoire of absolute rarity is the one presented in this discographic work, given the peculiarity represented by the organic (horn and piano) that in the history of music cannot boast large quantities of original compositions. The programme presented here by Nilo Caracristi and Giancarlo Guarino (v. TC.882480) covers various centuries and changing styles: the music, the performers and the listeners are involved in a constant transformation that is proposed, experienced and perceived on several levels. This musical journey begins with Gustavo Rossari’s Fantasia on motifs by Verdi, passes through the Italian twentieth century with the brilliant Sonata by Giorgio Ferrari, proceeds with Aleksandr Skrjabin’s wonderful, romantic Romanza, an early work of his, plunges into the contemporary age with the nostalgia and rhythmic vigour of Fabián Pérez Tedesco’s Fantasia and with the soft swing of Donato Semeraro’s Ballad and Salsa, and ends with the thrilling main theme of the soundtrack of The Godfather 2, by Nino Rota, presented in a further, final metamorphosis that this time directly involves the musicians, surprising the listeners with an unexpected effect. 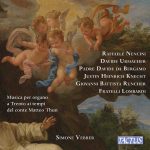