Born in France with Mozart’s double Concerto kv 299, explored (albeit with a certain discontinuity) by composers of the eighteenth and nineteenth centuries, the flute and harp duo was very popular with composers of the twentieth century, all over the world and in every possible style: the choice of the repertoire for this recording, however, privileged compositions inspired by the neoclassical taste, showing how it could be declined in many personal and different ways. This production is including an anthology of unpublished works for flute and harp (apart the famous sonata by Nino Rota, all other compositions are world premiere recordings) by the consolidated duo formed by Claudio Ortensi and Anna Pasetti, already distinguished for the publications aimed at the rediscovery of music written specifically for their instruments both in the Classicism (Luigi Gianella – Trois Duos Concertants op. 2, TC 770702, Tactus, 2014) and in the Romantic age (Music for flute and harp of the Italian nineteenth-century TC 800005, Tactus, 2017). 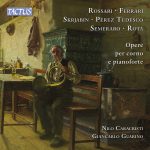 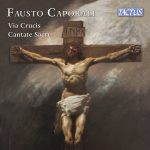