Vieri Tosatti, who was born and lived in Rome in the period after the Second World War, was a unique composer: he was irreverent, ironic, in the habit of going against the mainstream and keeping away from the academic world.
He called himself “a complicated man”. His original, expressive language, which stemmed from tradition, set him against the musical world of his time, which was relentlessly anchored to experimentation.
Tosatti was also a brilliant pianist. Tosatti was a learned man, and not in the field of music alone. He always remained true to his ideals, although this was to the detriment of his success and fame, as shown by his refusal of several official posts he was offered.
He composed several piano pieces during his youth and during his last period of activity, after an interval of more than twenty years.
The five pieces presented in this CD, which were recognised by the composer in his catalogue pertain to two distinct stages of his musical life. The refined pianist Daniele Adornetto, pupil of Tosatti in orchestration, guides us in this musical journey. 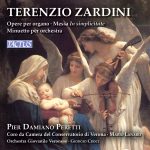