Artists who fitted completely into their place and time, their schools and background of peers, are fairly plain sailing.
The starting point is one and the same, like a word that begins in basic form before being overlaid with individual aesthetic, professional and productive connotations.
It may not be that easy, but it certainly remains so.
None of this applies to Luciano Simoni (1932-2010 who lived and thought in lofty style at Bologna, Italy, across the second half of the twentieth and into the twenty-first century without kowtowing to principles or any contemporary rules of art or life – which may be well and good, but are not to be taken on board a-critically.
Unlike many a colleague, Simoni approached classical music from every possible angle.
Which of them, for example, threw themselves enthusiastically into sacred music?
Simoni did, and among other things produced a full-scale Missa solemnis for chorus, orchestra and soloists. His fondness for chamber music was, of course, less unusual: he left some memorable scores such as those collected on the present CD whose programme includes three of the nine quartets and one trio for strings and piano. 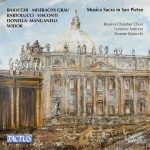 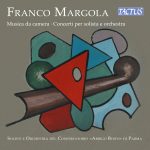