Bologna and San Petronio, patron saint and protector of the city, represent an inseparable union, a spiritual and civil unity that goes beyond the only meaning linked to religion. The Basilica named after him, symbol of the city, wants to revive the spirit of reconstruction promoted by the saint, when he found it devastated by the barbarian invasions and was the main protagonist of both material and intellectual rebirth, going as far as laying the foundations of what would be the first university in the world. A celebratory event organized by the “Messa in Musica” Association that with the same spirit involved the major institutions of the city, the Municipality, the Basilica and the Teatro Comunale, led to the commissioning to the composer Marco Taralli (already on Tactus’, Requiem – In Memoriam, tc.950006) a great mass for solos, choir, children”s choir and orchestra, to honor the patron saint of Bologna. The texts of the mass are completed by inserts from Liber Paradisus, the famous Bolognese 1256 text with which slavery was abolished for the first time in history. 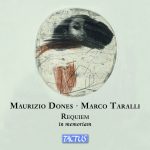 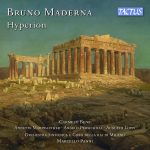