The recording of “La Leggenda di Vittore e Corona” focuses on themusical-liturgical repertoire that the ancient Venetian medieval tradition named after the two proto-martyrs. The source (Antifonario Marciano, Archivio di Stato di Venezia, 14th century) sings in the form of the minor liturgy of the Vespers the different moments of the Passio involving Vittore until he joined Corona in the martyrdom, reaching eternal glory. Far from representing only a local cult, the legend of Vittore and Corona is fully part of the history of Christianity and, in particular, of the defenseless yet determined struggle for the freedom of faith, thought and conscience. The style between the Gregorian and the Aquileian rite of the Marcian vespers (first performance in modern times) is very well accompanied by that of the polyphonic pieces taken from European codes of the same period, underlining the salient moments of the legend; the original alternation of the voices and medieval instruments between concordant monody and polyphonic dialogue connotes the performance of the InUnum Ensemble enhancing the narrative. 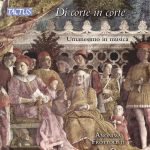 Various Authors: From court to court · HUMANISM IN MUSICMiddle Ages