L uca Marenzio was born in Coccaglio, in the province of Brescia in 1553 andhe died in 1599 in Rome. He was probably the most important artistic figure in the field of polyphony in the last twenty years of the sixteenth century.
Not all of Marenzio”s sacred music is extant, partially as a result of its being overshadowed by his extraordinarily successful madrigals. In the nineteenth century, the scholar Fétis listed five original editions of religious works, but only two of these–the Motecta festorum totius anni (1585) and the posthumous Sacraecantiones (1616)-are still preserved.
A second book of motets for fourvoices (1588), a collection of antiphons for six voices (1595) and a posthumous collection of polychoral motets for twelve voices (1614) have since disappeared.
Fortunately, a vestige of this remarkable repertoire is preserved invarious manuscripts and prints, dateable from approximately 1590 to the first decades of the seventeenth century. 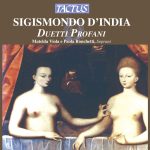 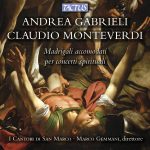