The unexpected finding, in Trento, in the attic of the former German Ginnasio-Liceo, of a typical military trunk dating back to the FirstWorldWar – which I had bought by pure chance in 1982 in an antique shop – makes it possible for us now to reconstruct a brilliant passage in the musical history of that city. The trunk contained some organ scores that had been written by Davide Urmacher (organist at the nearby church of San Pietro) and played by him, first on the fifteenthcentury organ, then on the organ made in 1862 by Giovanni Battista De Lorenzi, from Vicenza. Together with other scores countersigned by members of the Dall’Armi family, owners of a shop near the Ginnasio in Via San Pietro, this treasure chest has yielded some invaluable organ scores that were in use in the city between the end of the eighteenth century and the first half of the nineteenth. This entire collection, together with others (both public and private) existing in Trentino, provides a complex, varied and wide-ranging picture of the organ music that was being played in that period over the entire territory, with a lively circulation of material. The organist Simone Vebber makes use of a historic nineteenth-century organ in the performance of the compositions in the classic theatrical styles of the time. 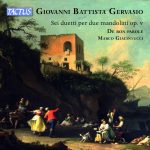